DISCLAIMER: IMO STATE VIOLENCE AGAINST PERSON PROHIBITION (VAPP) BILL; A BILL TO PROTECT CITIZENS FROM ALL ACTS OF VIOLENCE AND HARMFUL PRACTICES, NOT AN ABORTION BILL OR A BILL THAT PROMOTES SAME-SEX MARRIAGE.

There have been fallacies being spread by a Dr Philip Njemanze instigating that the Violence Against Persons Prohibition bill is an abortion bill. We are not unmindful of all these. They are lies and unscrupulous fallacies aimed at suppressing the rights of Citizens in Imo state and thus keeping them under the chains and cords of oligarchs and other power brokers for personal and selfish gains.

Every citizen of Imo state should be free to exercise their franchise and live their lives without fear and insecurities as a result of a dysfunctional and unorganised system. The rights of every citizen to safety should be held paramount and not be up for contemplative debates.

The Violence against person prohibition bill is a law to eliminate violence in private, domestic and public life, prohibit all forms of gender-based violence, harmful traditional practices, discrimination against persons, and to provide maximum protection and effective remedies for victims and punishment of offenders; and other related matters. The Bill only seeks to protect citizens from all forms of violence and harmful practices that endanger the lives and properties of citizens. it upholds the dignity and rights of men and women equally. Dr Philip Njemanze is borderline oblivious of the contents of this bill, we should call him by what he is, a clout seeker. Anyone who disbands or obstructs the pursuit of justice and the advocacy for the fundamental rights of citizens or kicks against measures that only aims at protecting men and women from acts of violence and other harmful practices lacks reasoning power and is an enemy of humanity. The VAPP bill which is almost a mirror of the VAPP Act at the National level defines evil as evil and evildoers as evildoers. It proscribes necessary punishment for violators or usurpers of human rights and the safety of all persons, without bias.

Alliances for Africa (AfA), Education as a Vaccine (EVA), Open Society Initiative for West Africa (OSIWA), Imo State Committee For Ending Violence Against Women and Girls (ISVAWG), African Women Development Fund (AWDF), United Nations Trust Fund (UNTF) and other Civil society organisations debunk and disclaim any suggestive comment and statement that defines the VAPP bill as an abortion bill or an LGBTQ bill. It is not. Let us call a spade a spade.

We demand that Dr Njemanze retract these slanderous statements against the VAPP and set right the fallacies he has set in motion.

The Violence Against Person prohibition bill is a public document and can be accessed by all. There are no hidden clauses suggestive of the fallacies being spread by Dr Philip Njemanze.
To read about the VAPP bill, kindly visit. www.alliancesforafrica.org/vapp

Read More about the bill here

About Alliances for Africa 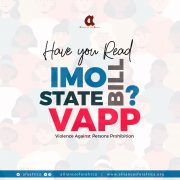 Call out for software developers